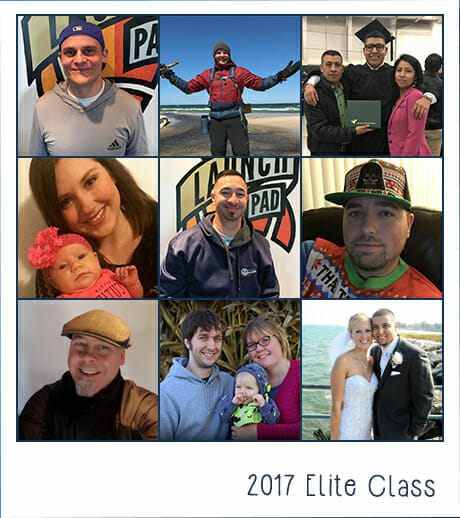 As ZMac continues to grow, we welcome our 2017 Elite Class.

Ryan is the youngest of 3 boys. He’s loved basketball since 2nd grade and coaches St. Cat’s high school basketball team. He also officiates youth games for the city of Racine. He enjoys fishing – especially for small mouth bass – and attending fitness classes at the YMCA 4 days a week. His favorite class is Body Pump (where you complete 1,000 reps in 60 minutes!). The next class he’s going to dive into is Zumba. He’s a big fan of grocery store salad bars! He loves Mexican, Italian and Chinese food, but don’t ask him to pick a favorite! The weirdest thing he’s ever eaten is a tie between sauerkraut and cauliflower. Chick-Fil-A is his All-Time-Favorite restaurant. In fact, if he ever gets married, Chick-Fil-A will cater the reception. And if, by chance, he meets someone who doesn’t like Chick-Fil-A, the wedding is off. Ryan’s looking forward to the warmer months because he loves attending the local festivals and events.

Matt currently lives in Milwaukee’s lower east side. Known as “Huff” by friends and family, he’s a recent Chicago transplant. He graduated form the University of Wisconsin-Whitewater with a degree in Sociology. His personal motto is “you miss every shot you don’t take,” which he adapted from Michael Jordan. Matt tries to stay as active as possible, weather permitting, with golf, baseball, snowboarding, backpacking, and camping. An interesting tidbit about Matt is that he’s deathly afraid of spiders. He’s seen spiders in Texas the size of your hand and admittedly had nightmares about being attacked by spiders. Three things you might not know about Matt are: he played college baseball, he’s a self-proclaimed mama’s boy (he sends his mama a text every day when he wakes up), and he’s a big movie fan. His All-Time Favorite movie is Fight Club, but he appreciates all movie genres and loves a good Rom-Com.

Edsel is 22 years old and has lived in Racine almost his entire life. He graduated from the University of Wisconsin-Parkside with a double major in Business Management and Marketing. Edsel holds a sales certificate and has competed in sales competitions representing UW-Parkside. He has a 3-year-old son who is obsessed with Disney, but somehow dislikes Mickey Mouse. He’s been to Disney World 3 times in the last 3 years and has another trip planned for later this year. Edsel loves boxing and has been a part of the Racine Boxing club for 8 years. He likes action movies – Rogue One was his favorite movie of 2016 – and listens to all types of music. His favorite guilty pleasure song is “Eye of the Tiger” which totally fits with his interest in boxing. Edsel learned to play basically an entire brass section and the cello, but hasn’t played anything recently. Edsel’s spirit animal is either an eagle or a unicorn, because they’re majestic.

Beth is a music loving, wine and coffee-seeking lady with a love for chatting and getting to know strangers. Beth’s personal motto is “you learn something new errrrry day.” She lives in a castle (ranch home) in Kenosha, WI with her high school sweetheart and husband, Brandon, and 3-month-old princess, Lena. Beth’s hobbies include: play dates with Lena and her nephew, spending time with Lena, and Netflix and actual chilling. Her hidden talent is opera singing! Between musical theatre, voice lessons, and choirs, she estimates she’s put in $50,000 into her voice since she was 8 years old. Adele is currently playing her car right now, but she can’t help but secretly love Rebecca Black’s “Friday.” Beth is looking forward to getting to know her ZMac family and make work feel like home.

Jason is originally from California and only recently moved to Oak Creek from Fort Atksinon, WI. He’s been in Wisconsin since November 2015. Jason has two beautiful little girls: 4-year-old Aria Lynn and 5-year-old Jesalynn Sky. He loves riding motorcycles and has been riding dirt bikes since he was 13 years old. He started out on a 125cc and then did some short track circuit racing on a 250cc. He then graduated to metric bikes and later to Harley motorcycles. In his free time you can usually find him riding his Harley or doing fun family things like taking his kids to Kalahari or Timbavati Wildlife Park. Jason doesn’t watch any television, but he owns one to watch movies. He’s a self-proclaimed movie buff. His All-Time Favorite movie is Top Gun. If Hollywood were to make a movie of Jason’s life he wants Will Smith to play him. He also loves music. What kind you ask? Every kind. He loves country, rap, hip-hop, dance, Christian music, alternative, rock n’ roll, and pop. His favorite 80s song is anything Michael Jackson.

Dave is a lifelong Racine resident and graduate of Horlick HS. He attended UW-Parkside for 4 years and received his Bachelors in Management and Human Resources and his MBA shortly thereafter. He studied international business in China for a summer between undergrad and grad school. Fun fact about China: they don’t have egg rolls, crab rangoon, or General Tso’s chicken on their menus. Or traffic laws. The traffic in China rivaled the worst traffic in NYC and LA combined. In his free time Dave likes to watch movies – Rogue One was his pick for Best Movie in 2016 – and shoot pool. Dave’s first word was yoda! He’s bartended at Outbreak Billiards & Bar for the last 15 years so he gets plenty of time to practice. Dave used to be in a local heavy rock band, Will of Tomorrow, for about 10 years and had the opportunity to play with several national acts along the way. His top 3 favorite musical acts are: Queen, Foo Fighters, and Alter Bridge, but his favorite guilty pleasure song is “Still the Night” by White Snake.

Nate lived in a house of music. His mother and stepfather were (and still are) musicians who bought their first home playing gigs all over Wisconsin. They would have rehearsal in his dinning room 3 days a week, so it was inevitable that he, too, would become a music lover and musician. Nate grew up in Racine and spent a lot of his younger years skateboarding and snowboarding. Eventually that led him to move to Colorado where he became a snowboard instructor. Flash forward a few years and he moved to Seattle to form a band with his brother. He still fondly thinks of his time in Seattle where he found success with radio play, touring, and playing support for large groups: 311, Run DMC, Sir Mix-A-Lot, Disturbed, Stone Sour, and Deftones to name a few. He considers himself more of a singer-songwriter, but his favorite song to cover is “Into The Mystic” by Van Morrison and he has a soft spot for 70s Yacht Rock. While Nate’s still playing music, he’s focusing all his energy and time on his family and career. He’s super stoked to be a member of #teamZMac and can’t wait to get to know everyone better. Cheers!

James is a huge fan of comedies, video games, and hanging with friends until all hours of the night. He’s enjoyed The Simpsons since he was a kid and his favorite shows are currently: American Dad, Brooklyn 99, and Bob’s Burgers. He also secretly loves watching Say Yes To The Dress and American Pickers. James’s main focus in life is his family, his wife Stephanie and his son Nathan. Together for 6 years and married for 3, James often contemplates what compelled Stephanie to take a chance on him. His son, Nathan, is 1 and is the easiest baby and has the most infectious laughter. James went to school at UW-Parkside for Economics, a study he’s always found interesting and believes will serve him well in this field. A self-proclaimed music lover, James recorded the album, “Back on my Feet” in 2011 and the music community is still a-buzz.
He’s excited to cut his teeth as a dispatcher in this incredible workplace with an awesome collection of people.

Cody just celebrated his 27th birthday a couple weeks ago! His free time is spent with his wonderful family: his wife Lauren, his 4-year-old daughter Addison, and his 8-month-old son Dominic. When he’s not with his family or friends you can find him playing darts somewhere. In fact, Cody plays darts for at least an hour every day, competes in numerous city, state, and world competitions, and went pro last year. A few things most people don’t know about Cody are: he’s played golf for over 20 years, he’s an avid gamer – he dares you to try to beat him in Madden – and he hates sweets – cookies, brownies, cakes, pies – you name it, he won’t eat it, and his family has had Packer season tickets for most of his life and he goes to at least one game every year.